The worst brawl in NBA history results in several players being suspended. Several players and fans are charged with assault and battery.

Germans begin to tear down the Berlin Wall.
[rdp-wiki-embed url=’https://en.wikipedia.org/wiki/Berlin_Wall’]

National Review is an American semi-monthly conservative editorial magazine focusing on news and commentary pieces on political, social, and cultural affairs. The magazine was founded by the author William F. Buckley Jr. in 1955. It is currently edited by Rich Lowry.

Since its founding, the magazine has played a significant role in the development of conservatism in the United States, helping to define its boundaries and promoting fusionism while establishing itself as a leading voice on the American right.

Before National Review’s founding in 1955, the American right was a largely unorganized collection of people who shared intertwining philosophies but had little opportunity for a united public voice. They also wanted to marginalize what they saw as the antiwar, noninterventionistic views of the Old Right.

In 1953 moderate Republican Dwight D. Eisenhower was president, and many major magazines such as the Saturday Evening Post, Time, and Reader’s Digest were strongly conservative and anticommunist, as were many newspapers including the Chicago Tribune and St. Louis Globe-Democrat. A few small-circulation conservative magazines, such as Human Events and The Freeman, preceded National Review in developing Cold War Conservatism in the 1950s.

Let’s Face it: Unlike Vienna, it seems altogether possible that did National Review not exist, no one would have invented it. The launching of a conservative weekly journal of opinion in a country widely assumed to be a bastion of conservatism at first glance looks like a work of supererogation, rather like publishing a royalist weekly within the walls of Buckingham Palace. It is not that of course; if National Review is superfluous, it is so for very different reasons: It stands athwart history, yelling Stop, at a time when no other is inclined to do so, or to have much patience with those who so urge it.

As editors and contributors, Buckley especially sought out intellectuals who were ex-Communists or had once worked on the far Left, including Whittaker Chambers, William Schlamm, John Dos Passos, Frank Meyer and James Burnham. When James Burnham became one of the original senior editors, he urged the adoption of a more pragmatic editorial position that would extend the influence of the magazine toward the political center. Smant finds that Burnham overcame sometimes heated opposition from other members of the editorial board, and had a significant effect on both the editorial policy of the magazine and on the thinking of Buckley himself 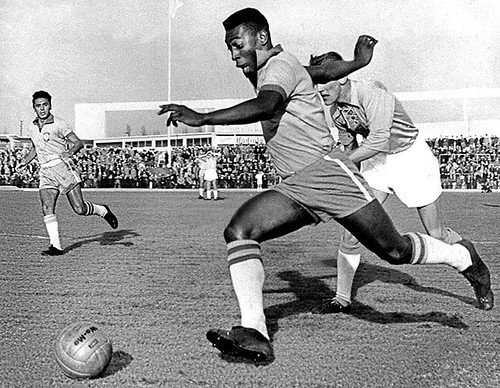 Pele, considered one of the greatest soccer players ever to take the field, was born Edson Arantes do Nascimento in Tres Coracos, Brazil, in 1940. He acquired the nickname Pele during his childhood though the name has no meaning in his native Portuguese. When he was a teenager, he played for a minor league soccer club in Bauru in Sao Paulo state and in 1956 joined the major league Santos Football Club in the city of Sao Paulo, playing inside left forward. Two years later, he led the Brazilian national team to victory in the World Cup. Pele, who was only 17 years old, scored two goals to defeat Sweden in the final.

Pele was blessed with speed, balance, control, power, and an uncanny ability to anticipate the movements of his opponents and teammates. Although just five feet eight inches tall, he was a giant on the field, leading Santos to three national club championships, two South American championships, and the world club title in 1963. Under Pele’s leadership, Brazil won the World Cup in 1958, 1962, and 1970. In 1970, Brazil was granted permanent possession of the World Cup’s Jules Rimet Trophy as a tribute to its dominance. On November 19, 1969, Pele scored his 1,000th goal on a penalty kick against Vasco da Gama. Eighty thousand adoring fans in Maracana stadium cheered him wildly, even though Santos was the opposing team.

Pele announced his retirement in 1974 but in 1975 accepted a $7 million contract to play with the New York Cosmos. He led the Cosmos to a league championship in 1977 and did much to promote soccer in the United States. On October 1, 1977, in Giants Stadium, he played his last professional game in a Cosmos match against his old team Santos.

During his long career, Pele scored 1,282 goals in 1,363 games. In 1978, Pele was given the International Peace Award and in 1993 he was inducted into the National Soccer Hall of Fame. Since retiring, he has acted as an international ambassador for his sport and has worked with the United Nations and UNICEF to promote peace and international reconciliation through friendly athletic competition.

The portrait of the ‘Artist Without Beard’ by Vincent van Gogh sells at auction for US$71.5 million.

The last self portrait of the famous artist Vincent van Gogh, titled “Portrait de l’artiste sans barbe ” or “Portrait of the Artist Without Beard ” sold at an auction in New York for US $71.5 million, making it one of the most expensive paintings of all time. The Dutch artist painted the 1889 self-portrait after he had shaved and gifted the painting to his mother for her 70th birthday, not long before he committed suicide in 1890. In 1998, the Van Gogh painting was one of 10 paintings put up for auction by the heirs of Jacques Koerfer, a German-born collector and the former chairman of the BMW who had died in 1991. The highest bid for the painting reached, almost three times its high estimate at $71.5 million. The buyer remains anonymous even today.

Almost 3/4th’s of all television sets in the USA are tuned into an episode of I Love Lucy to watch Lucy give birth.

TAP Portugal Flight 425 crashes in the Madeira Islands, killing all 130 onboard.