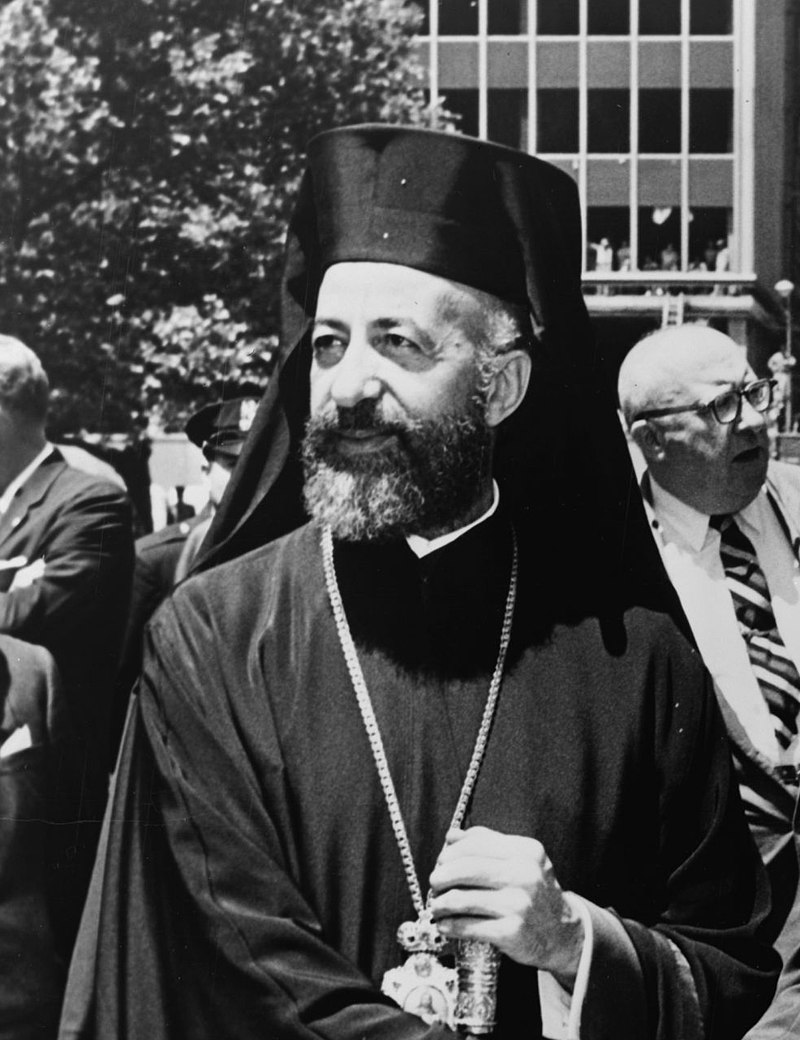 On 18 September 1950, Makarios, only 37 years old, was elected Archbishop of Cyprus. In this role he was not only the official head of the Orthodox Church in Cyprus, but became the Ethnarch, de facto national leader of the Greek Cypriot community. This highly influential position put Makarios at the centre of Cypriot politics.

During the 1950s, Makarios embraced his dual role as Archbishop and Ethnarch with enthusiasm and became a very popular figure among Greek Cypriots. He soon became a leading advocate for enosis, and during the early part of the decade he maintained close links with the Greek government. In August 1954, partly at Makarios’ instigation, Greece began to raise the question of Cyprus at the United Nations, arguing for the principle of self-determination to be applied to Cyprus. This was viewed by advocates of enosis as likely to result in the voluntary union of Cyprus with Greece following a public referendum.

However, the British government was reluctant to decolonise the island which had become their new headquarters for the Middle East. In 1955, a pro-enosis organization was formed under the banner of Ethniki Organosis Kyprion Agoniston, or EOKA. This was a typical independence movement of the period. Makarios undoubtedly had common political ground with EOKA and was acquainted with its leader, the Greek soldier and politician George Grivas, but the extent of his involvement is unclear and disputed. In later life he categorically denied any involvement in the violent resistance undertaken by EOKA.

On 20 August 1955, Greece submitted a petition to the United Nations requesting the application of the principle of self-determination to the people of Cyprus. After that, the colonial government of Cyprus enforced the anti-sedition laws for the purpose of preventing or suppressing demonstrations in favor of union with Greece; but the archbishop defied them and continued demanding self-determination for Cyprus.

In October 1955, with the security situation deteriorating, the British governor, Sir John Harding, opened talks on the island’s future. By this stage, Makarios had become closely identified with the insurgency, and talks broke up without any agreement in early 1956. Makarios, characterized in the British press as a crooked Cypriot priest and viewed with suspicion by the British authorities, was intercepted by Special Branch officers while attempting to board a flight at Nicosia airport. The joint police/military plan, codenamed Operation Apollo, saw Makarios exiled to Mahe Island in the Seychelles on 9 March 1956, as a ‘guest’ of Sir William Addis, Governor & Commander-in-Chief of the Seychelles. The Archbishop and his staff were flown to Aden and then on to Mombasa. At the Kenyan port the party were embarked in the East African Naval Vessel “Rosalind”, escorted by the frigate HMS Loch Fada. The flotilla arrived in Port Victoria on 14 March.

Makarios was released from exile after a year, although he was still forbidden to return to Cyprus. He went instead to Athens, where he was rapturously received. Basing himself in the Greek capital, he continued to work for enosis. During the following two years he attended the General Assembly of the United Nations where the Cyprus question was discussed and worked hard to achieve union with Greece.

Under the premiership of Constantine Karamanlis in Greece, the goal of enosis was gradually abandoned in favour of Cypriot independence. Negotiations in 1958 generated the Zurich Agreement as a basis for a deal on independence, and Makarios was invited to London in 1959 to fine-tune the plan. Makarios at first refused to accept the plan. The reversal of his pro-enosis stance, and his eventual agreement to sign the conditions for the independence of Cyprus, have been attributed to moral persuasion on behalf of the Greek and British governments.

On March 1, 1959, the archbishop returned to Cyprus to an unprecedented reception in Nicosia, where almost two-thirds of the adult Greek Cypriot population turned out to welcome him. Presidential elections were held on 13 December 1959, in which Makarios defeated his rival, lawyer Ioannis Clerides, father of future president and Makarios ally Glafkos Clerides, receiving two-thirds of the vote. Makarios was to become the political leader of all Cyprus as well as the communal leader of the Greek Cypriots.

Famous Words of Inspiration...
"I would not join any club that would have someone like me for a member."
Groucho Marx
— Click here for more from Groucho Marx