Thomas Wolsey is invested as a Cardinal.

The Large Hadron Collider at CERN, described as the biggest scientific experiment in history, is powered up in Geneva, Switzerland.
[rdp-wiki-embed url=’https://en.wikipedia.org/wiki/Large_Hadron_Collider’]

He was called El Liberator by the natives of Peru, Venzeula and Colombia, who followed his military leadership to independence. Sympathetic Americans drew parallels with their own struggle for independence, and called Simon Bolivar the “George Washington of South America.” Indeed, Simon Bolivar was the most important political and military figure in South American history, liberating Bolivia, Panama, Colombia, Ecuador, Peru, and Venezuela from Spain, and organizing them into self-sustaining nations — mostly under his leadership.

On this day, September 10, in 1823, after liberating Colombia and adding to its territory, Simon Bolivar returned to Peru to take charge of the military and government.

After the Upper Peru region became a separate nation, with Bolivar’s blessing, their government asked Bolivar to become their president. Bolivar declined, but did appoint one of his top aides, General Antonio José de Sucre, to the post. The country decided to name themselves after Bolivar: like Rome named after Romulus, from Bolivar would come Bolivia.

10 September 1846 – Elias Howe gets a patent for the sewing machine. 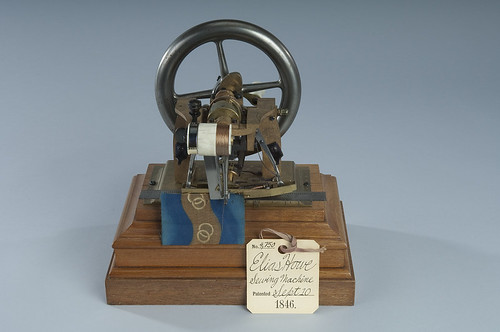 While working as a journeyman machinist, Elias Howe Jr. wrestled for years to find a way to mechanize sewing. With the family pinched by poverty, his wife sewed for others by hand at home. Watching her sew, Howe visualized ways to mechanize the process. In 1845, he built his first sewing machine and soon constructed an improved model, which he carried to the Patent Office in Washington to apply for a patent. He received the fifth United States patent for a sewing machine in 1846.

Howe’s patent claims were upheld in court to allow his claim to control the combination of the eye-pointed needle with a shuttle to form a lockstitch. Howe met with limited success in marketing his sewing machine. Subsequent inventors patented their versions of sewing machines, some of which infringed on Howe’s patent. He quickly realized his fortune depended on defending his patent and collecting royalty fees from sewing machine manufacturers. These royalty licenses granted companies the right to use the Howe patent on their machines.

In 1856, after years of lawsuits over patent rights, Elias Howe and three companies, Wheeler & Wilson, Grover and Baker, and I. M. Singer, formed the first patent pool in American industry. The organization was called the Sewing Machine Combination and/or the Sewing Machine Trust. This freed the companies from expensive and time-consuming litigation and enabled them to concentrate on manufacturing and marketing their machines.

The Large Hadron Collider built by the European Organization for Nuclear Research is started in Geneva, Switzerland.

Abebe Bikila becomes the first sub-Saharan African to win a gold medal at the 1960 Rome Olympics, winning the marathon running in barefeet.

The Large Hadron Collider is powered up in Geneva, Switzerland.

At the Rome 1960 Summer Olympics the Ethiopian, Abebe Bikila wins a gold medal, winning the marathon in bare feet.

German Formula One driver, Wolfgang von Trips, is killed at the Italian Grand Prix along with 13 spectators.