A duel occurs in which the Vice President of the United States Aaron Burr mortally wounds former Secretary of the Treasury Alexander Hamilton.

Greenwich Palace, from a window of which Elizabeth waved to the departing ships
In 1574, Frobisher petitioned the Privy Council for permission and financial support to lead an expedition to find a north-west passage to “the Southern Sea” the Pacific Ocean and thence to Cathay. Some of its members were intrigued by his proposal, but cautiously referred him to the Muscovy Company also called the “Russia Company”, an English merchant consortium which had previously sent out several parties searching for the North-east Passage around the Arctic coasts of Norway and Russia, and held exclusive rights to any northern sea routes to the East. In 1576, Frobisher persuaded the Muscovy Company to license his expedition. With the help of the company’s director, Michael Lok whose well-connected father William Lok had held an exclusive mercers’ license to provide Henry VIII with fine cloths, Frobisher was able to raise enough capital for three barques: Gabriel and Michael of about 20–25 tons each, and an unnamed pinnace of ten tons, with a total crew of 35. Queen Elizabeth sent word that she had “good liking of their doings”, and the ships weighed anchor at Blackwall on 7 June 1576. As they headed downstream on the Thames, Elizabeth waved to the departing ships from a window of Greenwich Palace, while cannons fired salutes and a large assembly of the people cheered.

On 26 June, the little fleet reached the Shetland Islands, where it stopped to repair a leak in Michael’s hull and repair the barques’ water casks. The ships hoisted sail the same evening and set course westwards, sailing west by north for three days until a violent storm rose and pounded them continuously through 8 July. On 11 July, they sighted the mountains of the southeastern tip of Greenland, which they mistook for the non-existent island called ‘Friesland’. Crossing the Davis Strait, they encountered another violent storm in which the pinnace was sunk and Michael turned back to England, but the Gabriel sailed on for four days until her crew sighted what they believed was the coast of Labrador. The landmass was actually the southernmost tip of Baffin Island; Frobisher named it “Queen Elizabeth’s Foreland”.

The ship reached the mouth of Frobisher Bay a few days later, and because ice and wind prevented further travel north, Frobisher determined to sail westwards up the bay, which he believed to be the entrance to the North-west Passage, naming it Frobisher’s Strait, to see “whether he might carry himself through the same into some open sea on the back side”. Gabriel sailed north-westwards, keeping in sight of the bay’s north shore. On 18 August, Burche’s Island was sighted and named after the ship’s carpenter who first spied it; there the expedition met some local Inuit. Having made arrangements with one of the Inuit to guide them through the region, Frobisher sent five of his men in a ship’s boat to return him to shore, instructing them to avoid getting too close to any of the others. The boat’s crew disobeyed, however, and five of Frobisher’s men were taken captive.

After days of searching, Frobisher could not recover the insubordinate sailors, and eventually took hostage the native man who had agreed to guide the Englishmen to see if an exchange for the missing boat’s crew could be arranged. The effort was fruitless, and the men were never seen again by their fellows, but Inuit oral tradition tells that the men lived among them for a few years until they died attempting to leave Baffin Island in a self-made boat. Frobisher turned homewards, and was well received by the Queen when he docked in London on 9 October. Among the things which had been hastily brought away by the men was a black stone “as great as a half-penny loaf” which had been found loose on the surface of Hall’s Island off Baffin Island by the ship master, Robert Garrard, who took it to be sea coal, of which they had need. Frobisher took no account of the black rock but kept it as a token of possession of the new territory.

Michael Lok said that Frobisher, upon his return to London from the Arctic, had given him the black stone as the first object taken from the new land. Lok brought samples of the stone to the royal assayer in the Tower of London and two other expert assayers, all of whom declared that it was worthless, saying that it was marcasite and contained no gold. Lok then took the “ore” to an Italian alchemist living in London, Giovanni Battista Agnello, who claimed it was gold-bearing. Agnello assayed the ore three times and showed Lok small amounts of gold dust; when he was challenged as to why the other assayers failed to find gold in their specimens, Agnello replied, “Bisogna sapere adulare la natura”. Ignoring the negative reports, Lok secretly wrote to the Queen to inform her of the encouraging result, and used this assessment to lobby investors to finance another voyage. Subsequently the stone became the focus of intense attention by the Cathay enterprise’s venturers, who saw in it the possibility of vast profits to be derived from mining the rocky islands of Meta Incognita; gossip spread in the court and from there throughout London about the gold powder Agnello was supposedly deriving from the rock.

The Jews are expelled from Little Russia. 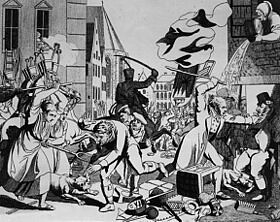 On this day in 1740 Pogrom: Jews were expelled from Little Russia.

A pogrom is a violent riot aimed at massacre or persecution of an ethnic or religious group, particularly one aimed at Jews.

The term originally entered the English language to describe 19th- and 20th-century attacks on Jews in the Russian Empire (mostly within the Pale of Settlement in present-day Ukraine); similar attacks against Jews at other times and places also became retrospectively known as pogroms.

The eight-hour day becomes the law for workers in the Netherlands.

To Kill a Mockingbird is first published.