A Soviet Zulu-class submarine becomes the first to launch a ballistic missile.

The Montreal Protocol is signed to protect the ozone layer from depletion.
[rdp-wiki-embed url=’https://en.wikipedia.org/wiki/Montreal_Protocol’]

AS THE SUN SET on the afternoon of 16 September 1975, the Australian flag came down for the last time from Hubert Murray Stadium, in Papua New Guinea’s capital of Port Moresby. Almost 70 years of Australian governance was coming to an end.

At 9.30am the next day, a different flag – black and red with a golden bird of paradise – rose on Independence Hill, near a newly formed Parliament House. PNG was no longer an Australian territory but an independent nation.

In contrast to other recently independent states such as Uganda and Kenya, the change of authority in PNG was marked not by bloodshed but by celebration. Sir John Guise, the first Governor-General of PNG, said at the flag lowering ceremony: “It is important the people of Papua New Guinea, and the rest of the world, realise the spirit in which we are lowering the flag of our colonisers. We are lowering the flag, not tearing it down.”

Australia shares a complex history with its closest neighbour. The Australian government first assumed responsibility for the southern half of modern-day PNG in 1906, when Prime Minister Edmund Barton agreed to take control of what was then a British colony.

Australia’s interest in the region lay primarily in the exclusion of other European powers. At the time, Germany occupied the northern half of PNG, so the southern half served as a buffer zone between the Australian mainland and German territory. During the First World War, Australian forces expelled the Germans, and ex-German New Guinea was also claimed as Australian territory.

When the Japanese invaded PNG in July 1942, Australian and Papua New Guinean soldiers banded together to halt the advance – first at Milne Bay and then along the Kokoda Track. The victories underscored the importance of these territories to Australia’s security.

By the 1970s, control of PNG was affording little strategic benefit to Australia and many Papua New Guineans yearned for independence. In 1972, Australian Prime Minister Gough Whitlam and PNG leader Michael Somare began working together toward decolonisation. Three years later it became a reality.

Trial separation
Although formally separated since, Australia and PNG have maintained a close relationship. “What seemed like a divorce in 1975 is a trial separation, in which the two governments can negotiate a new way of living next to each other,” says Donald Denoon, writer and former Professor of History at the University of Papua New Guinea.

With some of the worst health and education problems in the Asia-Pacific region, PNG continues to rely heavily on Australian aid; our government will next year provide $482.3 million in funding to promote development and help lift Papua New Guineans from poverty.

Some historians argue that many of the problems stem from a rushed independence – that PNG was not ready to govern itself. Donald disagrees: “Despite immense problems, Papua New Guinea was well governed for at least a decade after 1975. We cannot assume that longer Australian tutelage would have produced better [native] governance.”

Australia is set to provide continuing support, but the ultimate goal is to make PNG self-sustaining. “Papua New Guinea did become independent in 1975,” says Donald, “but I now see this as a phase in a much longer relationship, rather than the end of a turbulent story.”

Pilgrims set sail on the Mayflower from England. 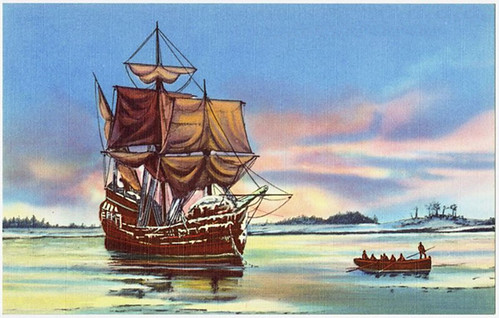 The Mayflower sails from Plymouth, England, bound for the New World with 102 passengers. The ship was headed for Virginia, where the colonists–half religious dissenters and half entrepreneurs–had been authorized to settle by the British crown. However, stormy weather and navigational errors forced the Mayflower off course, and on November 21 the “Pilgrims” reached Massachusetts, where they founded the first permanent European settlement in New England in late December.

Thirty-five of the Pilgrims were members of the radical English Separatist Church, who traveled to America to escape the jurisdiction of the Church of England, which they found corrupt. Ten years earlier, English persecution had led a group of Separatists to flee to Holland in search of religious freedom. However, many were dissatisfied with economic opportunities in the Netherlands, and under the direction of William Bradford they decided to immigrate to Virginia, where an English colony had been founded at Jamestown in 1607.

The Separatists won financial backing from a group of investors called the London Adventurers, who were promised a sizable share of the colony’s profits. Three dozen church members made their way back to England, where they were joined by about 70 entrepreneurs–enlisted by the London stock company to ensure the success of the enterprise. In August 1620, the Mayflower left Southampton with a smaller vessel–the Speedwell–but the latter proved unseaworthy and twice was forced to return to port. On September 16, the Mayflower left for America alone from Plymouth.

In a difficult Atlantic crossing, the 90-foot Mayflower encountered rough seas and storms and was blown more than 500 miles off course. Along the way, the settlers formulated and signed the Mayflower Compact, an agreement that bound the signatories into a “civil body politic.” Because it established constitutional law and the rule of the majority, the compact is regarded as an important precursor to American democracy. After a 66-day voyage, the ship landed on November 21 on the tip of Cape Cod at what is now Provincetown, Massachusetts.

The Montreal Protocol is signed in order to protect the ozone layer from further depletion.

The first commercial photocopier, the Xerox 914, is demonstrated.

To protect the ozone layer, the Montreal Protocol is signed.

The first photocopier, the Xerox 914, is demonstrated.