Thomas Edison demonstrates his phonograph for the first time.

English forces defeat the French in Brittany, ending the War of the Breton Succession.

On this day in 1911, Italy declared war on the Ottoman Empire. That was the beginning of the Italo-Turkish War it lasted from 1911 to 1912.

That war was surprisingly historically influential, although it was fought in an ostensibly marginal area. Specifically, it was something akin to a prelude to the Balkan wars, mainly because the Balkan states realized that Italy had defeated the Turkish forces relatively easily.

In addition to Libya, Italy conquered the Dodecanese Islands in the Italo-Turkish War, situated near the coast of Asia Minor.

It was a set of islands which had had great historical significance in ancient times. Rhodes, Patmos, Kos Hippocrates’s native island, Karpathos, and many others islands were among them.

The Italians had a significant impact on the conquered Ottoman territories, and the remains of Italian architecture can still be seen there.

The First Balkan War, in which Serbia, Bulgaria, Montenegro and Greece attacked the Ottoman Empire, began before the Italo-Turkish War ended. 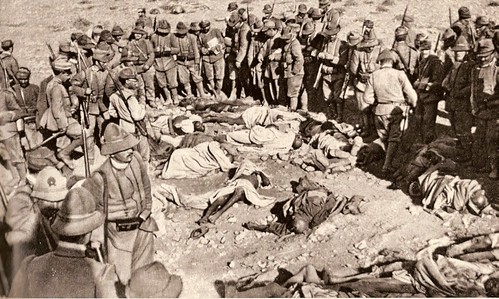 The Ottoman Empire, long considered the “Sick Man of Europe,” was the ostensible ruler of the Muslim and Arab-speaking North African provinces of Tripolitania and Cyrenacia (now both known as Libya). Neighboring Egypt was also technically an Ottoman possession, but had been occupied and controlled by the British for decades. The Ottomans thus had no land connection to their Libyan provinces.

Italy, united into one nation only in the 1860s, was late in joining the other nations of Europe in conquering and occupying African land to turn into colonies for the purposes of profit, glory and power. After losing out on a claim to the North African region of Tunisia, Italy turned to Tripolitania and Cyrenacia for imperial expansion.

After securing the complicity or neutrality of the other “Great Powers” of Europe, Italy presented the Ottoman government with an ultimatum on September 28, 1911 demanding that Italy be allowed to occupy Tripolitania and Cyrenacia under the pretext of protecting Italian citizens living there from the alleged threats of Muslim extremists. The Ottomans rebuffed the Italians, but indicated that they were open to negotiations. Obviously anticipating a rejection of their demands, Italy declared war on September 29, 1911.

The Battle of Chaffin’s Farm and New Market Heights, also known as Laurel Hill and combats at Forts Harrison, Johnson, and Gilmer, was fought in Virginia on September 29–30, 1864, as part of the Siege of Petersburg in the American Civil War. From the very beginning of the war, Confederate engineers and slave laborers constructed permanent defenses around Richmond. By 1864, they had created a system anchored south of the capital on the James River at Chaffin’s Farm, a large open area at Chaffin’s Bluff, both named for a local landowner. This outer line was supported by an intermediate and inner system of fortifications much closer to the capital. In July and August 1864, these lines were tested by Union Lt. Gen. Ulysses S. Grant in offensives designed to attack simultaneously north and south of the James. The fighting around Chaffin’s Farm cost the nation nearly 5,000 casualties.

The Metropolitan Police of London (known as the Met) is founded.

The British Mandate for Palestine comes in.