The rule of the Bavand dynasty in Mazandaran is brought to an end by the murder of Hasan II.

The last French troops are withdrawn from occupied Syria. 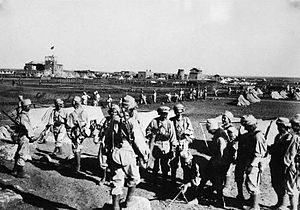 Crisis Phase July 2, 1919-July 17, 1925:Syrian nationalists, meeting in Damascus on July 2, 1919, called for the independence of the Syrian territory from France. French troops took control of the Syrian territory on September 15, 1919, and General Henri Gouraud was named French High Commissioner for on October 9, 1919. Syrian nationalists rebelled against the French government beginning in December 1919. Syrian nationalists declared Syria’s independence on March 8, 1920, and proclaimed Faisal Hussein as King of Syria on March 11, 1920. During the San Remo Conference held in San Remo, Italy on April 19-26, 1920, the Supreme Council of Allied Powers assigned a mandate over the Syrian territory to the French government. On July 14, 1920, General Henri Gouraud issued a surrender ultimatum to King Faisal Hussein, who shortly surrendered to French authorities. French troops took control of the city of Aleppo on July 23, 1920. French troops commanded by General Mariano Goybet clashed with Syrian rebels commanded by Yusuf al-‘Azma near the town of Maysalun on July 23-24, 1920, resulting in the deaths of some 400 Syrian rebels and 42 French soldiers. French troops took control of the city of Damascus on July 25, 1920. King Faisal Hussein formally relinquished the throne of Syria on July 25, 1920. France established the states of Damascus and Aleppo, along with the autonomous Alawite territory, within the French Mandate of Syria on December 1, 1920. France established the autonomous Druze territory in the southern part of the state of Damascus on May 1, 1921. French troops suppressed a rebellion in the Alawite state led by Shaykh Saleh al-Ali on June 15, 1921. On March 4, 1922, the French government transformed the autonomous Druze territory into the Souaida state. Government police suppressed Syrian nationalist demonstrations in Damascus on April 8-12, 1922, resulting in the deaths of three individuals. France established the Syrian Federation on July 1, 1922, comprising the Damascus state, Aleppo state, and autonomous Alawite territory. Subhi Bay Barakat al-Khalidi was elected president of the Syrian Federation. The League of Nations Council formally approved the French Mandate of Syria on July 24, 1922. General Maxime Weygand was named French High Commissioner for Syria on April 19, 1923. The League of Nations Mandate of Syria and Lebanon under French Administration formally entered into force on September 23, 1923. General Maurice Sarrail was named French High Commissioner for Syria on November 29, 1924. The French government dissolved the Syrian Federation, and combined the states of Damascus and Aleppo to form the State of Syrian on January 1, 1925. The People’s Party, a Syrian nationalist group headed by Abd al-Rahman Shahbandar and Faris al-Khuri, was formally established on June 5, 1925. On July 11, 1925, government police arrested three Druze sheikhs in Damascas and imprisoned the sheikhs in Palmyra in central Syria.

Post-Conflict Phase June 2, 1927-April 17, 1946: The French government renamed the Souaida state as the Jabal Druze state on June 2, 1927. The National Bloc, an alliance of nationalist groups led by Ibrahim Hannanu and Hashim Atassi, was established in 1928. High Commissioner Auguste Henri Ponsot appointed Taj al-Din al-Hasani as head of state (head of government) of Syria on February 15, 1928. Elections for a 70-member constituent assembly were held on April 10 and April 24, 1928. The Constituent Assembly convened on June 9, 1928, and presented a draft constitution to the Syrian assembly on August 7, 1928. Several parts of the draft constitution were unacceptable to the French government. André François-Poncet, the French High Commissioner, dissolved the Constituent Assembly on May 14, 1930. The French high commissioner promulgated a constitution for the Syrian State on May 22, 1930, which provided for an elected parliament and president. Legislative elections were held on December 20, 1931 and January 4, 1932, and the National Bloc won 17 out of 69 seats in the Syrian Chamber of Deputies. The Syrian Chamber of Deputies elected Mohammed Ali al-Abid as president on June 11, 1932. The Syrian State was renamed the Republic of Syria in July 1932. Damien de Martel was appointed as French High Commissioner for Syria on July 16, 1933. The governments of France and Syria signed the Franco-Syrian Treaty on November 16, 1933, promising French support for an independent Syria within four years. On November 3, 1934, the French high commissioner suspended the Chamber of Deputies in which there was strong opposition to the Franco-Syrian Treaty. Following the closure of the National Bloc office in Damascus and the arrest of two National Bloc leaders by government police, the National Bloc called for a general strike starting on January 20, 1936. Government police killed two demonstrators in Allepo on January 21, 1936. Government troops killed four protesters in Damascus on January 21, 1936. and killed two individuals in a funeral procession in Damascus on January 22, 1936. Government troops killed three demonstrators in Homs on January 22, 1936. Some 40 demonstrators were killed by government troops in Hama on February 6, 1936. Three demonstrators were killed by government troops in Homs on February 8, 1936. Five demonstrators were killed by government police in Dayr al-Zur on February 10, 1936. The French government declared martial law in Damascus on February 10, 1936, and declared martial law in Aleppo, Homs, and Hama on February 12, 1936. Jamil Mardam and Nasil al-Bakri, leaders of the National Bloc, were arrested by government police and deported in February 11, 1936. On March 2, 1936, the French government agreed to negotiations with the National Bloc, which called off the general strike on March 6, 1936. Representatives of the French and Syrian governments signed the French-Syrian Treaty of Friendship and Alliance on September 9, 1936, which provided for the end of the mandate within three years. Legislative elections were held on November 30, 1936. The Syrian Chamber of Deputies elected Hashim al-Atassi of the National Bloc as president on December 21, 1936. On December 26, 1936, the Chamber of Deputies ratified the French-Syrian Treaty of Friendship and Alliance. President Hashim al-Atassi resigned on July 7, 1939. Gabriel Puaux, the French High Commissioner for Syria, suspended the Syrian constitution on July 10, 1939. On the same day, High Commissioner Gabriel Puaux dissolved the Chamber of Deputies and appointed a Council of Commissioners headed by Bahij al-Khatib to administer Syria. The French Mandate of Syria came under the control of “Vichy France” on July 10, 1940. Henri Dentz was appointed as Vichy French High Commissioner for Syria on December 6, 1940. “Free French” troops and British troops liberated Syria from Vichy France on June 14, 1941. Georges Catroux was appointed as General Delegate of “Free France” for Syria on June 24, 1941. General Charles de Gaulle appointed Taj al-Din al-Hasani as president of Syria on September 12, 1941. Georges Catroux, General Delegate General of “Free France” for Syria, declared the independence of the Republic of Syria on September 27, 1941. President Taj al-Din al-Hasani died of a heart attack on January 17, 1943. Georges Catroux, the General Delegate of “Free France” for Syria, restored the constitution of the Republic of Syria on March 25, 1943. Jean Helleu was appointed as the General Delegate of “Free France” for Syria on June 7, 1943. A newly-elected Chamber of Deputies convened and a elected a president on August 17, 1943. Yves Chataigneau was appointed as General Delegate of “Free France” for Syria on November 23, 1943. Etienne Beynet was appointed as General Delegate of “Free France” for Syria on January 23, 1944. On May 17, 1945, French troops landed in Beirut, Lebanon in order to restore French administration over Lebanon and Syria following the end of the Second World War. French troops shelled the Syrian parliament and attempted to arrest Syrian government leaders in Damascus on May 29-31, 1945, resulting in the deaths of some 500 individuals. Prime Minister Winston Churchill of Britain demanded a ceasefire on May 31, 1945. The League of Arab States Council expressed support for Syrian independence on June 6, 1945, and demanded the withdrawal of French troops from Syria on June 8, 1945. The French government agreed to transfer command of the Syrian military to the Republic of Syria on August 1, 1945. The Republic of Syria achieved independence when the last remaining French troops withdrew on April 17, 1946.

A group of Cuban exiles financed and trained by the CIA lands at the Bay of Pigs in Cuba with the aim of ousting Fidel Castro. 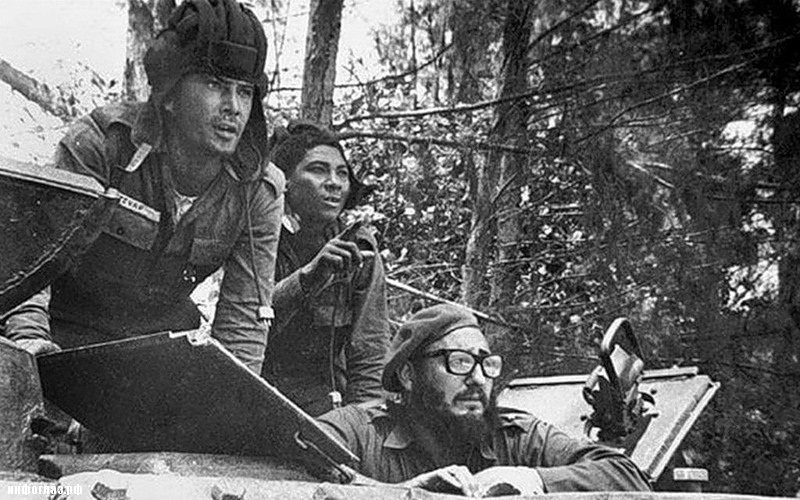 The Bay of Pigs Invasion was a failed military invasion of Cuba undertaken by the Central Intelligence Agency CIA-sponsored paramilitary group Brigade 2506 on 17 April 1961. A counter-revolutionary military group, trained and funded by the CIA, Brigade 2506 fronted the armed wing of the Democratic Revolutionary Front and intended to overthrow the increasingly communist government of Fidel Castro. Launched from Guatemala and Nicaragua, the invading force was defeated within three days by the Cuban Revolutionary Armed Forces, under the direct command of Castro.

The coup of 1952 led by General Fulgencio Batista, an ally of the United States, against President Carlos Prio, forced Prio into exile to Miami, Florida. Prio’s exile was the reason for the 26th July Movement led by Castro. The movement, which did not succeed until after the Cuban Revolution of 31 December 1958, severed the country’s formerly strong links with the US after nationalizing American economic assets.

It was after the Cuban Revolution of 1959, that Castro forged strong economic links with the Soviet Union, with which, at the time, the United States was engaged in the Cold War. US President Dwight D. Eisenhower was very concerned at the direction Castro’s government was taking, and in March 1960 he allocated $13.1 million to the CIA to plan Castro’s overthrow. The CIA proceeded to organize the operation with the aid of various Cuban counter-revolutionary forces, training Brigade 2506 in Guatemala. Eisenhower’s successor, John F. Kennedy, approved the final invasion plan on 4 April 1961.

Over 1,400 paramilitaries, divided into five infantry battalions and one paratrooper battalion, assembled in Guatemala before setting out for Cuba by boat on 13 April 1961. Two days later, on 15 April, eight CIA-supplied B-26 bombers attacked Cuban airfields and then returned to the US. On the night of 16 April, the main invasion landed at a beach named Playa Girón in the Bay of Pigs. It initially overwhelmed a local revolutionary militia. The Cuban Army’s counter-offensive was led by José Ramón Fernández, before Castro decided to take personal control of the operation. As the US involvement became apparent to the world, and with the initiative turning against the invasion, Kennedy decided against providing further air cover. As a result, the operation only had half the forces the CIA had deemed necessary. The original plan devised during Eisenhower’s presidency had required both air and naval support. On 20 April, the invaders surrendered after only three days, with the majority being publicly interrogated and put into Cuban prisons.

The failed invasion helped to strengthen the position of Castro’s leadership, made him a national hero, and entrenched the rocky relationship between the former allies. It also strengthened the relations between Cuba and the Soviet Union. This eventually led to the events of the Cuban Missile Crisis of 1962. The invasion was a major failure for US foreign policy; Kennedy ordered a number of internal investigations across Latin America. Cuban forces under Castro’s leadership clashed directly with US forces during the Invasion of Grenada over 20 years later.

Syria gets its independence from the French occupation.

In June 1940, after the Franco-German armistice, the French in Syria announced that they would cease hostilities against Germany and Italy and recognize the Vichy government. Political uncertainty and the growing scarcity of goods and rising prices caused unrest, which was led by one of the prominent nationalists, Shukri al-Quwatli. In May 1941 the Vichy government allowed German aircraft to land and refuel en route to Iraq, and in June, British, Commonwealth, and Free French forces invaded Syria. French troops resisted for a month, but Damascus was occupied on June 21, and hostilities ceased at midnight on July 11–12.

There followed two years of disagreement about the transfer of authority from the French administration to the Syrian and Lebanese governments. A crisis took place in 1945, when the French refusal to transfer control of the local armed forces led to disorders, culminating in a French bombardment of Damascus and British intervention. After long negotiations and discussion in the UN Security Council, agreement was reached on simultaneous British and French withdrawal from Syria and Lebanon. Withdrawal from Syria was completed by April 1946. Syria had already become a founder member of the UN and of the Arab League.

The Ford Mustang is introduced to the North American market for the first time.

The first Ford Mustang is introduced in the USA.

The 335 Years’ War between the Netherlands and the Isles of Scilly comes to an end.